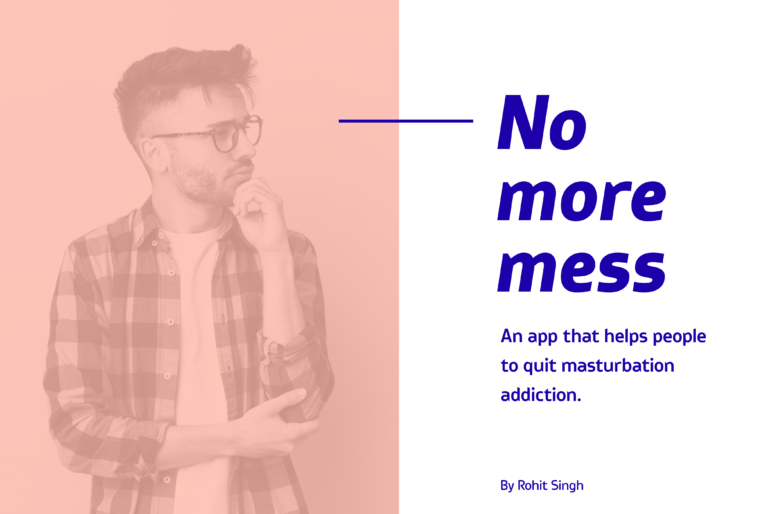 I started looking for an app on the play store to suggest to my friend (since people feel taboo talking about these bad habits with family or doctors).

I found a couple of apps there, but after using the app I found ample opportunity for improvement.

For example, I have attached a video where I am using this app first time. As you can see the app is not personalized and misses its goal when the userland the first time on the app.
The only thing I like about the app was the little bit of gamification and community features.

Not satisfied with the existing solutions

I was not happy with the app at all so, I used google this time and found a few solutions in the articles but still, they all are based too much upon the willpower of the user. e.g. Avoid pornography, and Do exercise.

Here is the link to the article: https://www.medicalnewstoday.com/articles/325743#how-to-stop

After defining the problem.

I was looking to start with empathy and personas but,

To fill out these things I need some real data. For that I had to take interviews with people but, The was a problem I can’t start with an interview or survey because:

Here are a few things I found:

One user’s answer was not enough to design the whole app. So, I decide to use “Sales safari”(a remote user research method used for finding user problems)!

With those interview data and survey data, I designed the persona!

Here are my few takeaways which I think are the main culprit:

There are lots of opportunities as well as problems that can be tackled through the app. But, I am going to move with the one main obstacle which is:

There is no solid solution regarding increasing self-control especially when the person is addicted. But, I had found that the environment & triggers play a very critical role when the user makes decisions.

There was lots of idea and things going in my mind about the app because I have to create the behaviour intervention as well as merge it will the product so, I decided to create brain mapping to see the big picture.

Rather than creating the whole app flow in one go, I decided to draw the flow one by one. Until I reached the MVP of the app.

It will help me to avoid confusion as well as extra work.

Figma link in case you want to see progress: https://www.figma.com/file/uQmjYBbpWZn3RUdXsyYKOk/nomoremess?node-id=0%3A1

Like what you have readed? Join this newsletter and stay updated

Every month I share research-based insight and practical tips, which can help you grow your online website more!